Once again this year Music Workshops will be conducted by our premier musicians.  The workshops are in the MUSIC WORKSHOP POP-UP TENT  located in Heritage Park along the shaded area behind the gazebo.

On the guitar, Bill Hedderich will conduct a workshop from l:00-2:00PM.  Bill is Sunset Bluegrass’ lead vocalist and plays lead and backup guitar.  Bill started playing bass as a teenager in a rock band.   He later moved to guitar, playing country and bluegrass.  Bill also plays lead guitar for two local country bands.

Pete Mirando will conduct a free banjo workshop in the POP-UP tent located in Heritage Park from 2:00-3:00PM.  Pete is the leader of Sunset Bluegrass and has been a banjo teacher for 43 years.  He has played with a number of bands which were predominantly bluegrass or folk in flavor and has written an instruction book and contributed columns in Banjo Newsletter.

New for 2019 the Jam Tent will be hosted by The Buffalo Barn Katz to get the music rock’n.  There will be a learn-to-jam session and a whole suite of musical instruments will be available to touch and play at no cost. So if you ever want to learn to play or try your hand at an instrument this is a great opportunity to try more than one.

PLAY ALONG  IN THE JAM TENT….

BRING YOUR ACOUSTIC INSTRUMENT AND JOIN THE BUFFALO BARN KATZ IN THE ALL DAY OPEN JAM TENT LOCATED NEXT TO THE TRADING POST. 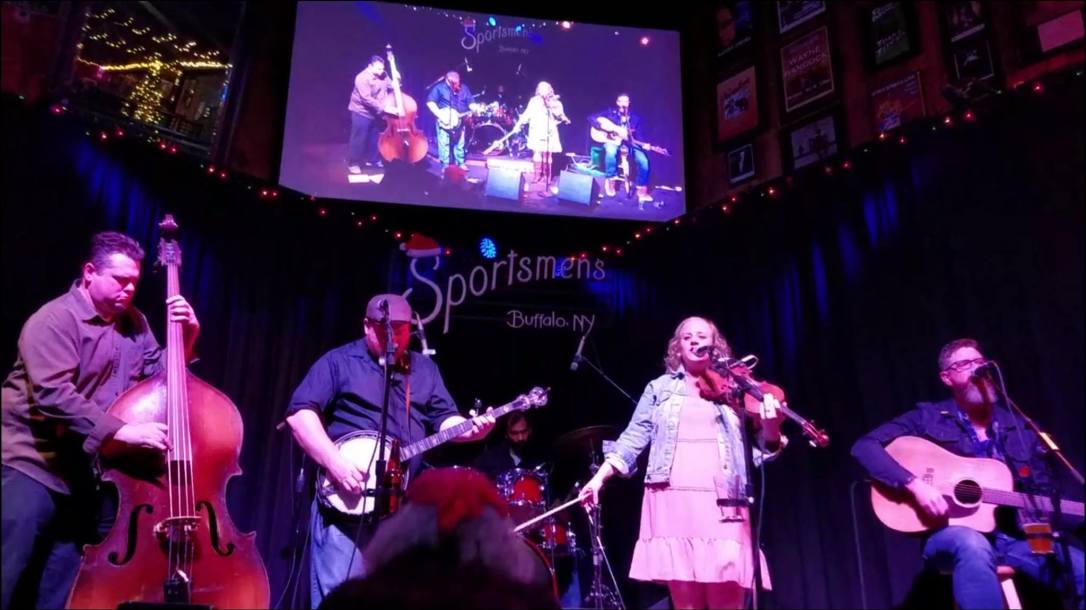 The Rearview Ramblers are a bluegrass/original Americana group that has hit the Western New York music scene in a very big way. Tight harmonies, instrumental prowess, and contagious energy are all hallmarks for this group of young musicians. Based out of Buffalo, NY and it’s surrounding suburbs, the Rearview Ramblers have been turning heads at venues all over Western New York, and were voted the Best New Band in Buffalo in the 2016 Best of Buffalo awards. With their unique blend of original material, updated takes on traditional bluegrass songs, and bluegrass twists on popular music, the Rearview Ramblers have found an eclectic mix of material that guarantees to delight audiences of all ages, and has earned them supporting roles with various national acts such as The Ragbirds and Yonder Mountain String Band, and performances at venues from private events at the Chautauqua Institution to Babeville to The Sportsmans Tavern to Canalside in Buffalo.

Offering a savory blend of acoustic Bluegrass, Celtic, traditional and original music, City Fiddle Band is the husband and wife team of Phil and Gretchen Banaszak with the multi-talented Chris Panfil.

One of Western New York’s best-known fiddlers, Phil Banaszak is a former New York State Fiddle Champion, and in 2005 was inducted into the North American Fiddlers’ Hall of Fame. In addition to being a founding member of City Fiddle, Phil is a charter member of the Canal Street String Band, a regular member of The Creek Bend Band and performs with the Buffalo Bluegrass All-Star Band. He is the Chairman of the Instrumental Department at the Community Music School in Buffalo where he teaches fiddle and mandolin. Phil serves on the Board of Directors of the Western New York Bluegrass and Old Time Music Association and he released a book of original neo-traditional fiddle music and accompanying CD in 2002.

Gretchen Banaszak began playing the violin in the fourth grade, and later attended the New England Conservatory of Music. In 1997, after a 17-year hiatus from music, she began playing the fiddle with a special affinity for the Celtic and early American traditions. She is a regular performer at Living History events at Old Fort Niagara, and at American Civil War reenactments across the region. She also serves on the Board of Directors of the New York State Old-Tyme Fiddlers’ Association, based in Osceola, New York.

Chris Panfil is a versatile singer-songwriter and instrumentalist who has appeared with many popular Bluegrass, Country and Folk acts from New York to Florida. He balances powerful vocals with mandolin, fiddle, guitar, harmonica and Irish Banjo. Chris is well known as a solo performer but also performs with Creek Bend, Emerald Isle, The Panfil Brothers and with a variety of other bands in the area. He was inducted into the Buffalo Music Hall of Fame in 2017.